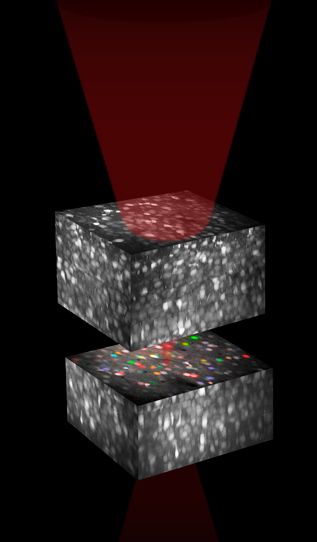 I obtained my Ph.D. in the laboratory of R. Clay Reid at Harvard Medical School, studying the functional organization of neurons in primary visual cortex utilizing two-photon microscopy to visualize the activation of individual neurons in anesthestized animals. By presenting an image stimulus to the eyes of the animals, we could evaluate the nature of information processing from the retina to primary visual cortex.

Specifically, I was interested in the patterns of neuronal activation that persisted in the absence of stimulus. These patterns, known as "spontaneous activity" or more recently "resting-state activity", are hypothesized to reflect the underlying connectivity of neurons and brain areas.

To the right is an illustration that I created to illustrate the two photon imaging techniques, which was used in an issue of Scientific American.